It all began back in May 2020 and has continued for 19 contests. Over the year and a half we have given away 36 tickets to one of the dynamic summer theatre company in Southern Ontario. In December 2021, we had one more grand prize to give away….two season passes for the 2022 season.  So as the curtain closes on the Photo Contest it rises with renewed optimism that this year will see live theatre once again on the Northern Lights Performing Arts Pavilion.

But before we go, we like to say thank you everyone for playing the game. We know you enjoyed seeing the pictures from the 20 seasons of Highlands Summer Festival productions. We look forward to seeing you this summer at the theatre where we can make more memories again.
Click on photos to enlarge the photo, get the answer, and find out who won!

Contest # 19 showed the cast of the 2019 production of Mary Poppins singing the never to be forgotten Supercalifragilisticexpialidocious. The winner of Contest # 19 - two season passes for the 2022 Season - is Laura Atkinson. 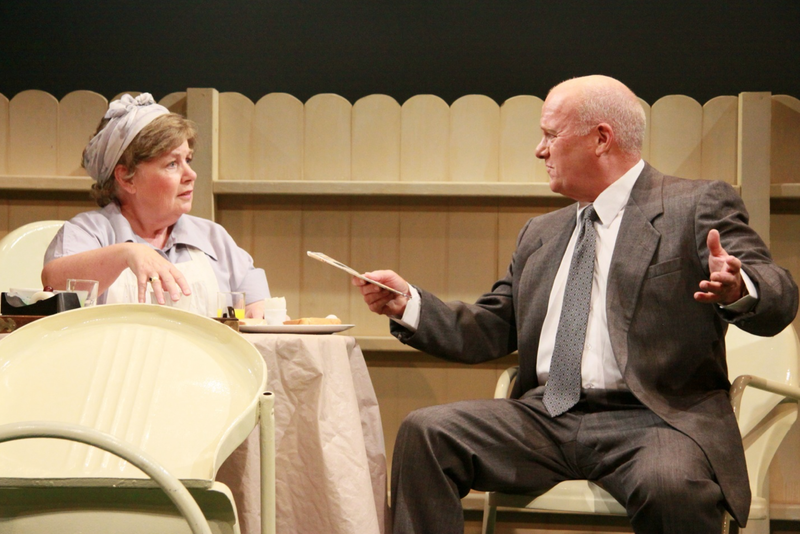 No correct entries for Contest # 18 and so we are unable to award last month’s prize. The photo showed characters Hilda Fluck and her husband Sam Fluck (playwright Norm Foster, always dancing close to the edge with names), played by real life husband and wife Beth and Brian Kipping in the 2017 show Hilda’s Yard. 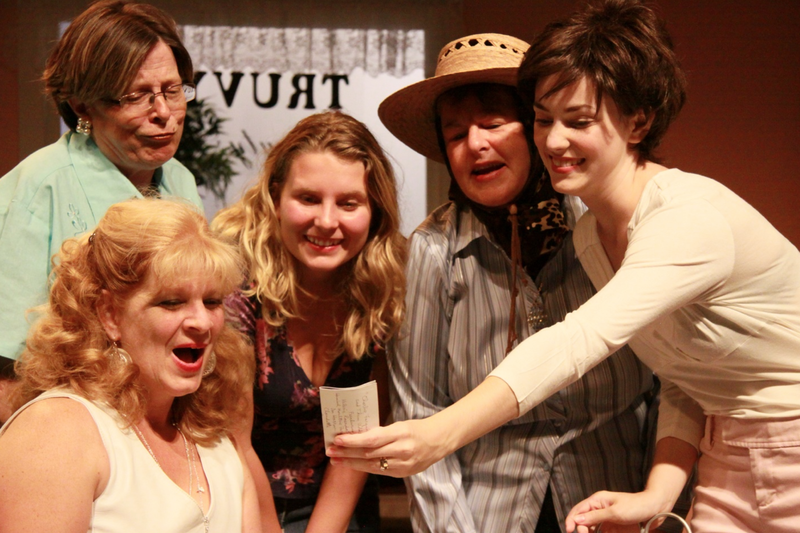 Contest # 17 featured a scene from the 2012 show, Steel Magnolias. The shot include a couple of our favourite, and now departed actors, Maureen James and Lorraine McNeil. Also in the picture were Lindsey Hawley, Laura Ostler and Kelly McNamee. The one cast member not in the shot was Kathryn Boyd. Since there were no winners in Contest # 17, we now have six tickets to give away to any of the 2022 season productions (watch for announcements this month). 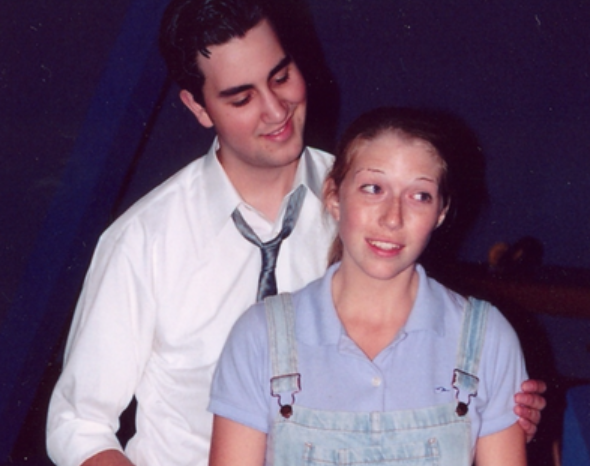 Contest # 16 was a photo from the play That Summer, which hit the boards in 2002. It was a great “cottage-based” story, lovingly written by David French. The young couple seen in the photo is Ryan Sisson and Carrie Heyes. No winner this time out, so, as is our practice, we will double the prize to four tickets for any of the 2022 season presentations.

Contest # 15 was a photo from the last year Highlands Summer Festival presented a season. The photo is from the show The Ladies Foursome and includes from the left, Laura Ostler, Erin VanderBurgh, Myrna McBrien (who also directed the show) and Sue Hemstreet. The quizmaster wanted to know why the four had such shocked looks on their faces. Well, Lori Lloyd knew it wasn’t because of a hole in one or a mama bear and three cubs crossing the fairway or that someone had just driven his golf cart into a pond. They were in shock because one of their drives had just hit a golfer on the fairway in the head. Ouch! Lori wins two tickets to any of the 2022 season productions. 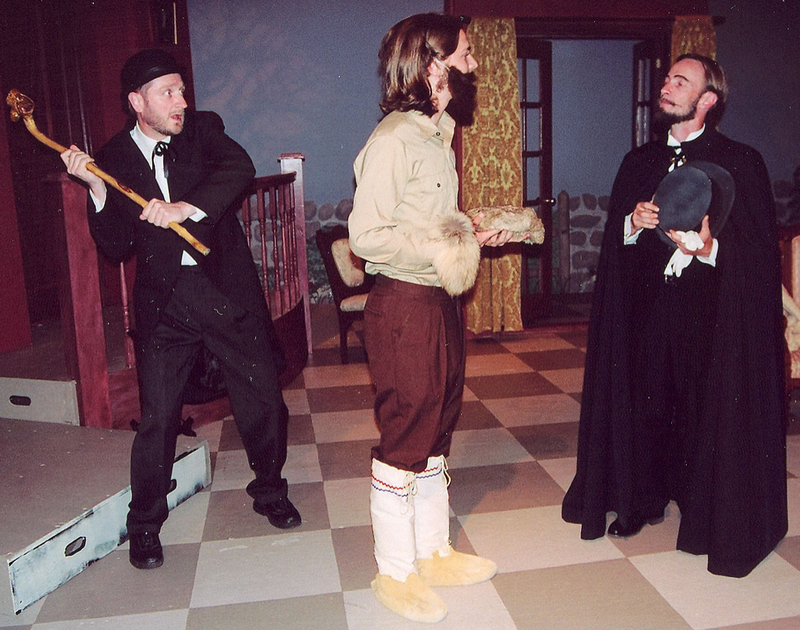 Contest # 14 was a photo from one of the earlier seasons of the Highlands Summer Festival. Way back in 2003 The Mumberly Inheritance melodrama feature two nefarious accomplices Tim Nicholson, right and Tom Regina on the left attempting to dispatch juvenile hero of the story, Arlen Davis Mighton. Mary Lawr is the winner this week. She picks up four tickets to any of the show offered in next season. 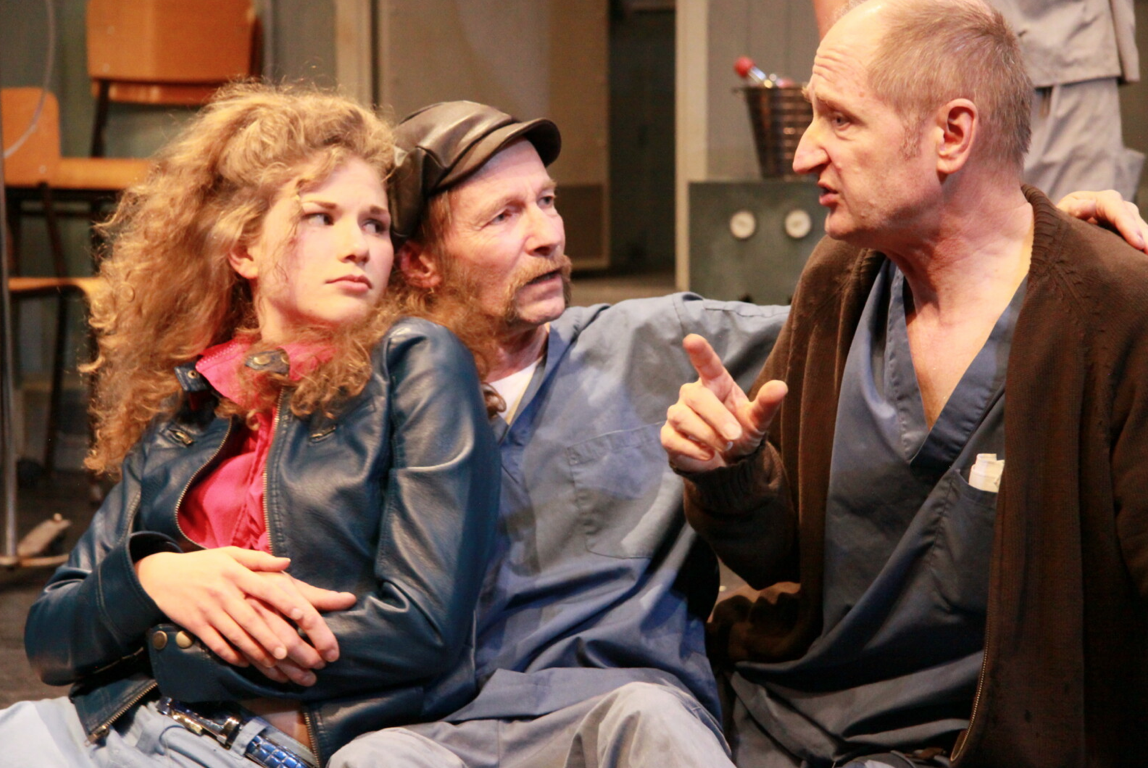 Contest # 13 was unlucky, apparently. We have no correct answers for the photo which showed, from the left, Amy Leis, Tim Nicholson and Tom Regina in the 2015 production of One Flew Over The Cuckoo’s Nest. Interestingly the talented Amy Leis played two characters in the show, the shy Nurse Flinn and party girl Sandra, as seen in the photo. So, on to the next challenge and four pairs of tickets waiting for the lucky winner. 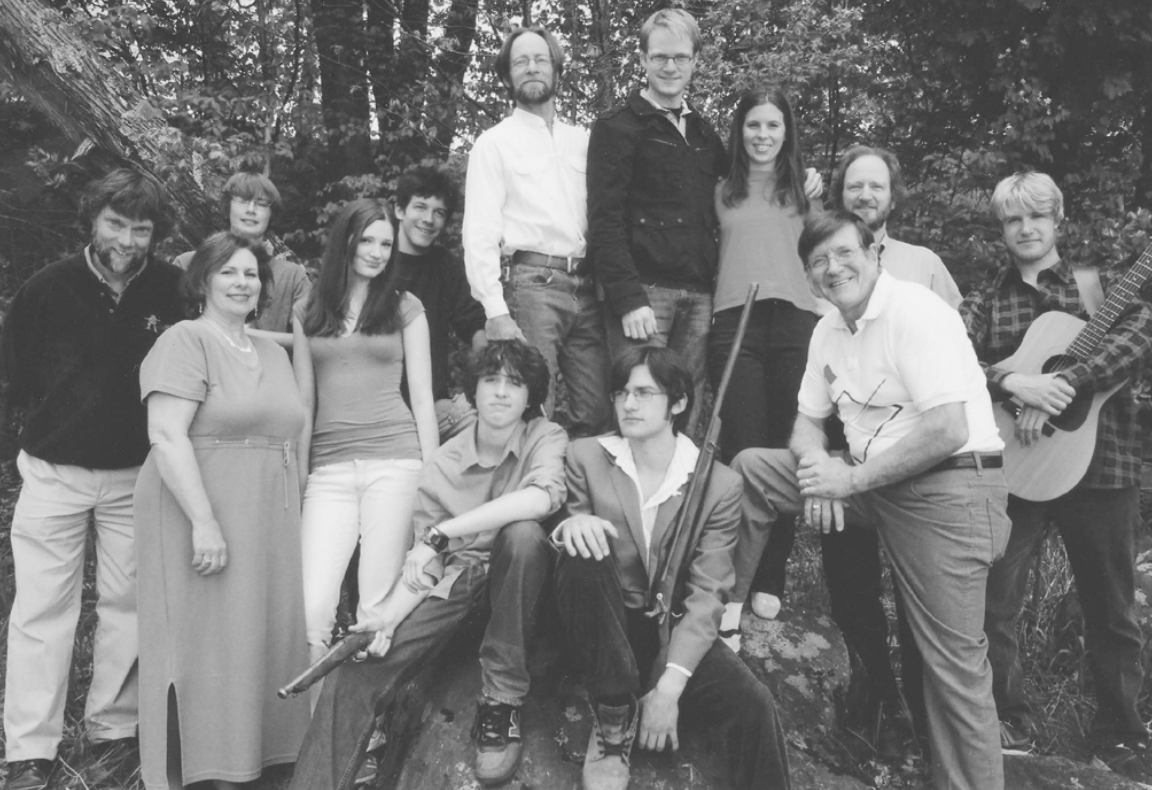 Contest # 12 - Glen Carter correctly identified the cast picture. The photo shows a shot of the cast of the musical The Perilous Pirate’s Daughter, presented in the 2005 season. The play was written by David Archibald and Anne Chislett with music and lyric by Archibald. This hardy band of buccaneers included, approximately left to right, playwright David Archibald, Christine Archer, Shane Dibblee, Jocelyn Regina, Mitch Rea, Benton Brown, Tim Nicholson, Tyson Farrell, Dan Falk, Kathryn Boyd, David Mills, Tom Regina and Michael Johnson (not related to pirate Bill Johnson).So, on to the next challenge and two pairs of tickets waiting for the lucky winner. 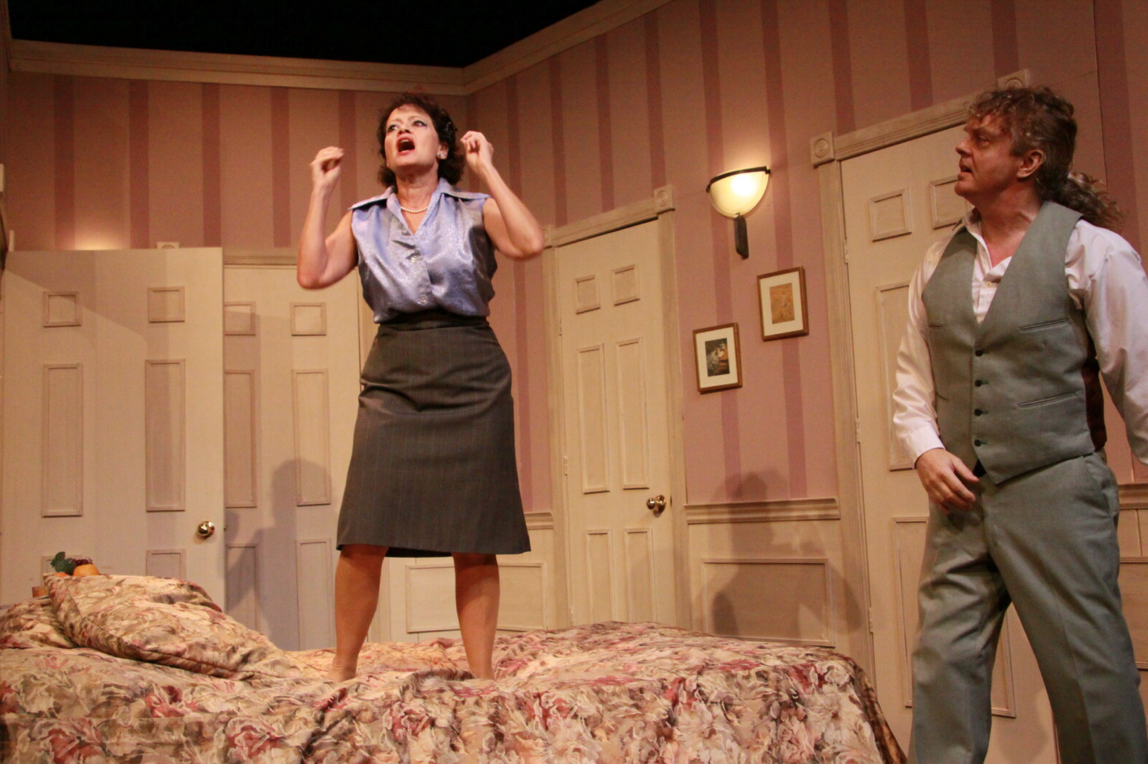 Contest # 11 - Tina Hadley correctly identified Sue Black (jumping on the bed) and Carl Dixon in a scene from the farce Lend Me A Tenor. You can tell it’s a farce because behind the actors there are four doors just begging to be slammed…..and that is only half of the set! 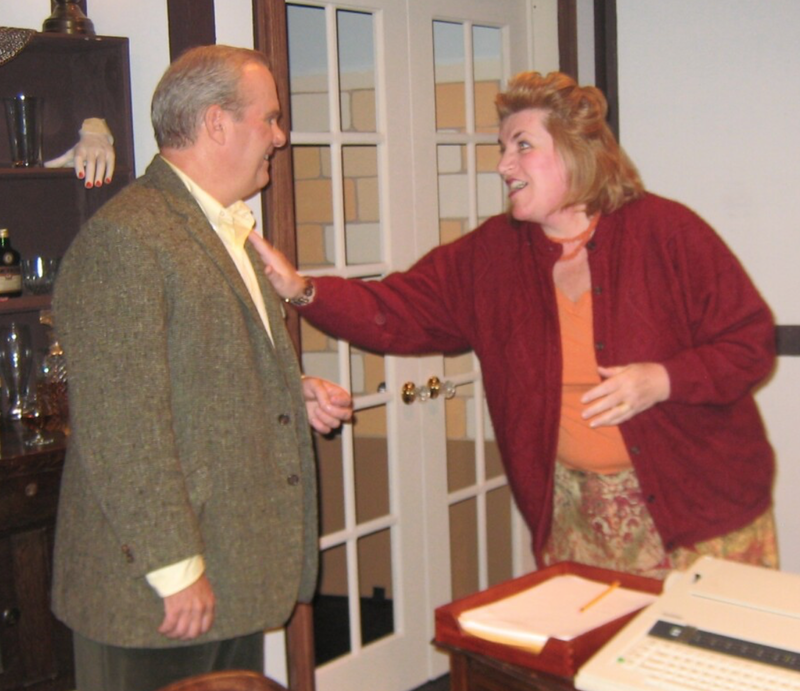 We did not have a winner for Contest # 10 in which Karen Frybort and Brian Kipping appeared in the 2008 murder mystery Deathtrap. Oh, and there was a Guillotine on stage as part of the set. 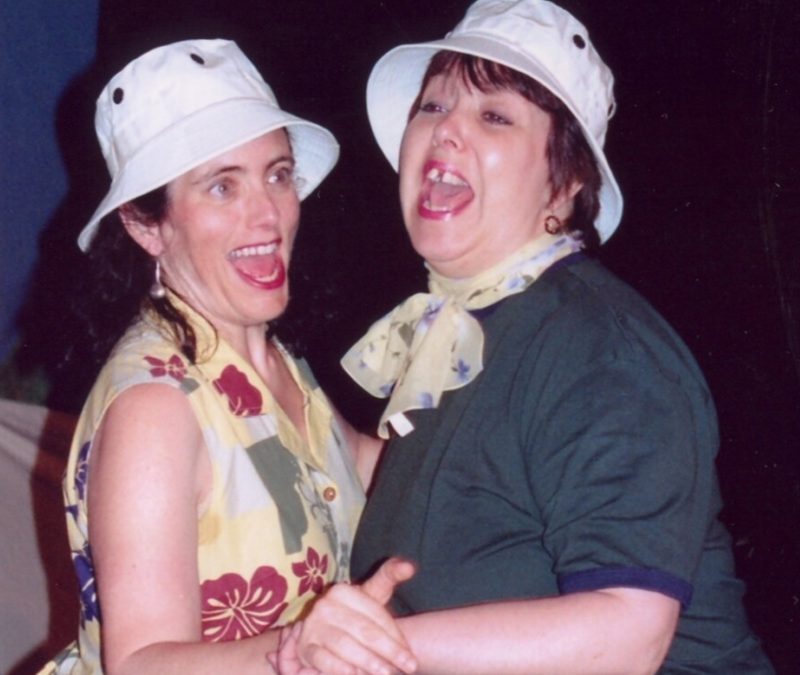 We did not have a winner for Contest # 9 which showed two of our favourite music instructors dancing and singing up a storm in the 2002 concert called Au Naturel. The third member of the cast we were hoping you could identify was yet another music instructor, Tom Regina, who made his appearance in a bee costume to delight the audience with a flute solo, Rimski-Korsakov’s Flight of the Bumblebee. The premise of the concert was that the three musicians were on camping trip with the usual gear, musical instruments and a grand piano. 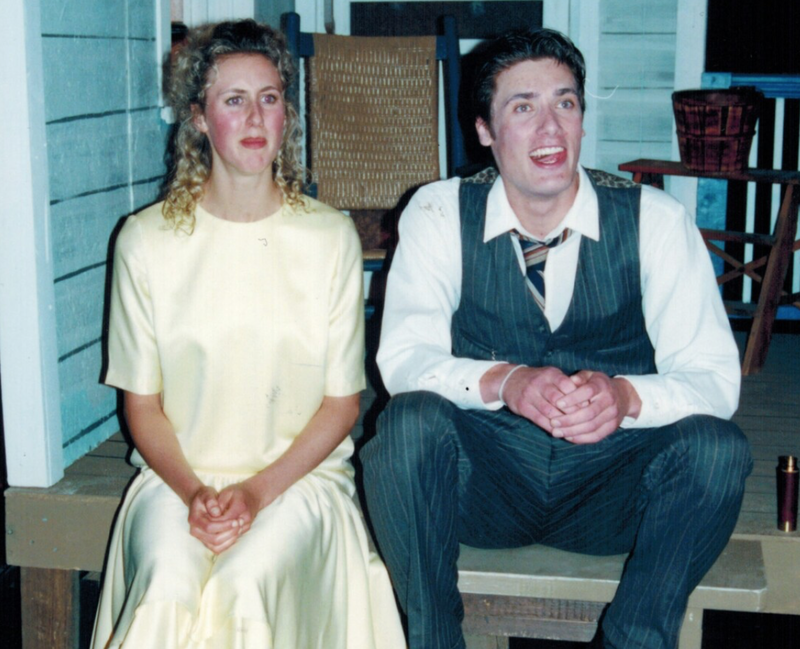 Donna Clarke won six tickets! She correctly identified actors Kate Campbell and Ryan Dawson as Mary Snow and Jacob Mercer in Samuel French’s Salt-Water Moon from the opening 2000 season. In fact, the play, directed by Doug Brohm, was the very first production of the company. It is one of a number of plays written by David French highlighting the sacrifice of residents of Newfoundland in World War One. 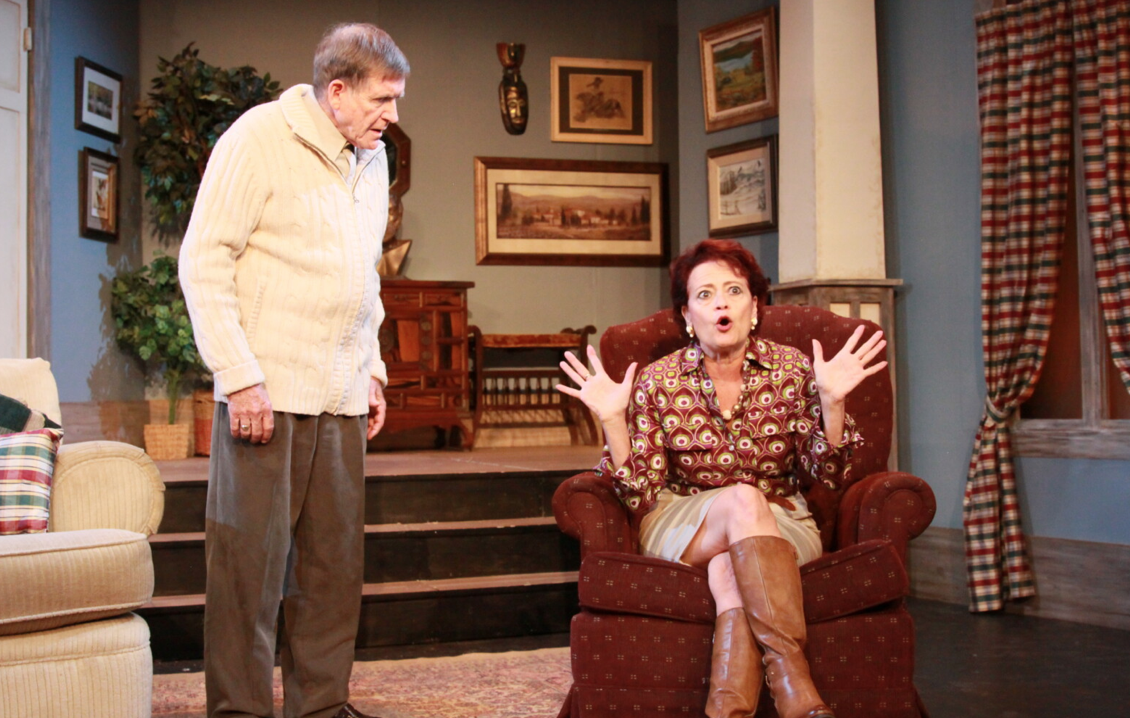 No one solved the mystery of this thriller in Contest #7. The 2018 production of Cliffhanger included David Mills as Henry Lowenthal and Sue Black as Edith Wilson. And the person about to attempt murder is.... So that means there will be six tickets available to win in Contest #8! 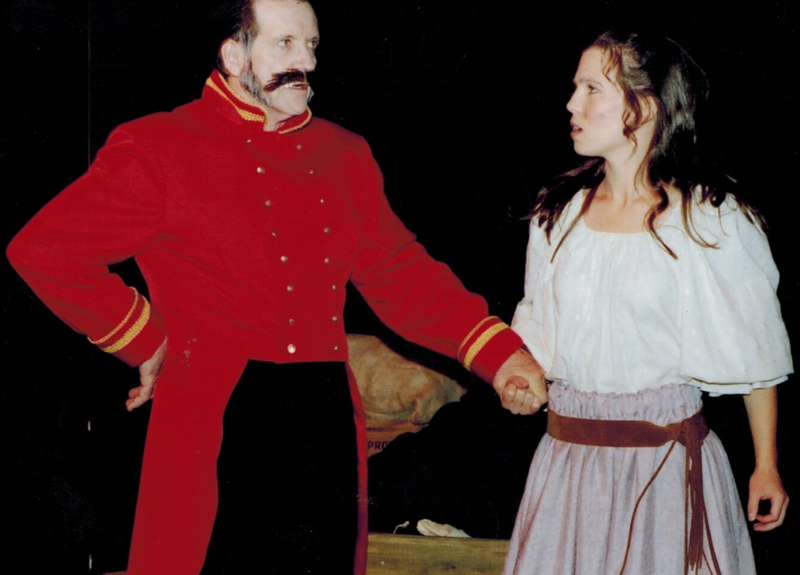 Perhaps it was the mustache that threw people or the fact the audience was thinking: wasn’t he just on stage as Pirate Bill Johnson, but alas no one was able to correctly identify David Mills as mustachioed Allan MacNab, who also appeared as Pirate Bill seen in the picture with Kate Johnson, played by Kathryn Boyd. It was the 2005 musical production of The Perilous Pirate’s Daughter, written by David Archibald. No winner means the next contest prize has four tickets to give away. 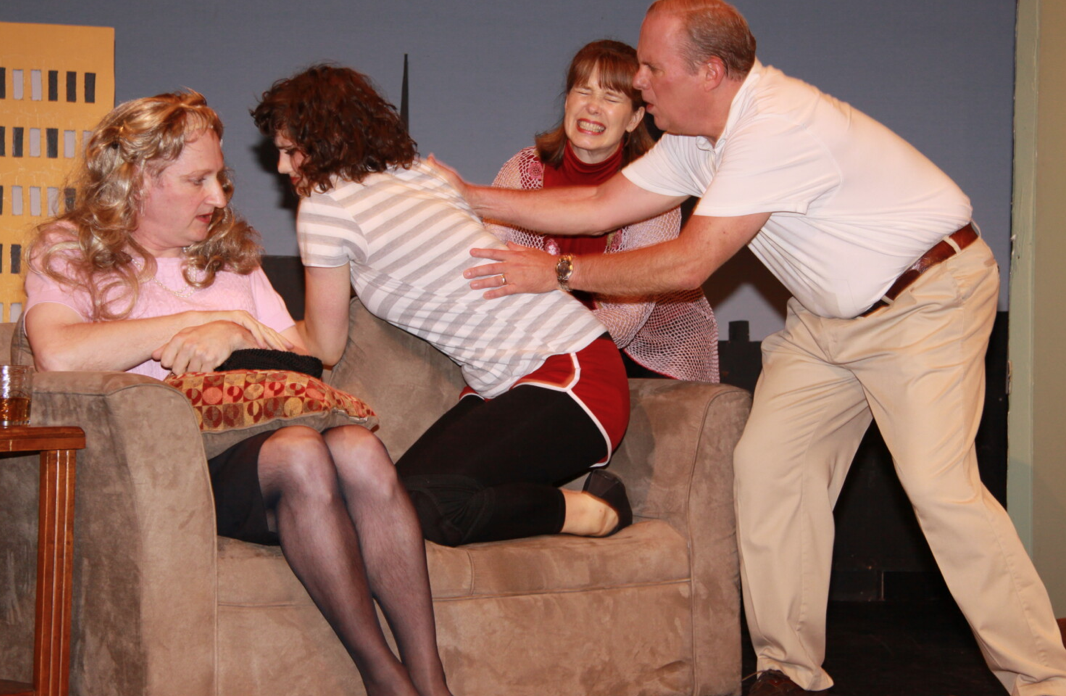 Contest # 5 - Lucy Haniak won four tickets to any production in the 2021 season. Lucy correctly identified the photo as being from the show Sylvia from 2010. In the picture, from the left, is Tom Regina, who played three roles in the show, including two women, Jocelyn Regina who played the title character, a dog, Lesley English and Brian Kipping. The man of the house, Brian, brings a stray dog home much to the chagrin of his wife, Lesley. Jocelyn was masterful in her portrayal of a dog, verbalizing its thoughts as the couple and visiting friends debated the animal’s future. 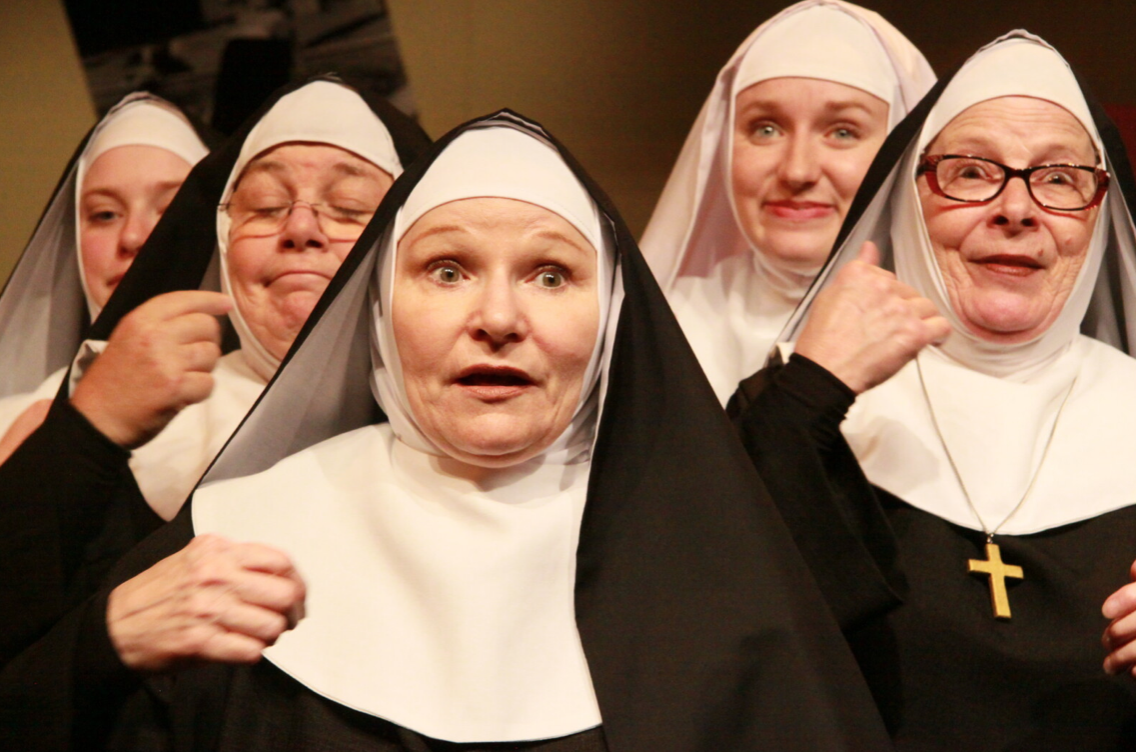 Well, there were nun winners in contest # 4. The photo featured the five nuns from the 2013 production of Nunsense. Some might have been confused, since we presented a follow-up to that show in 2015 called Nunsensations, featuring the nuns in Las Vegas. Further adding to the confusion, the casts were almost identical, with one small difference. In the cast of both shows were Maureen James. Beth Kipping, Pat Piché, and Victoria Bingham. The actor playing the novice was different in each show…..In last month’s photo we see Jaqueline Janas in that role. In Nunsensations it was played by Hannah Klose. Pat Piché, playing Sister Amnesia, is the one who had the puppet. So, without a winner, we now have four tickets for the 2021 season up for grabs for contest # 5. 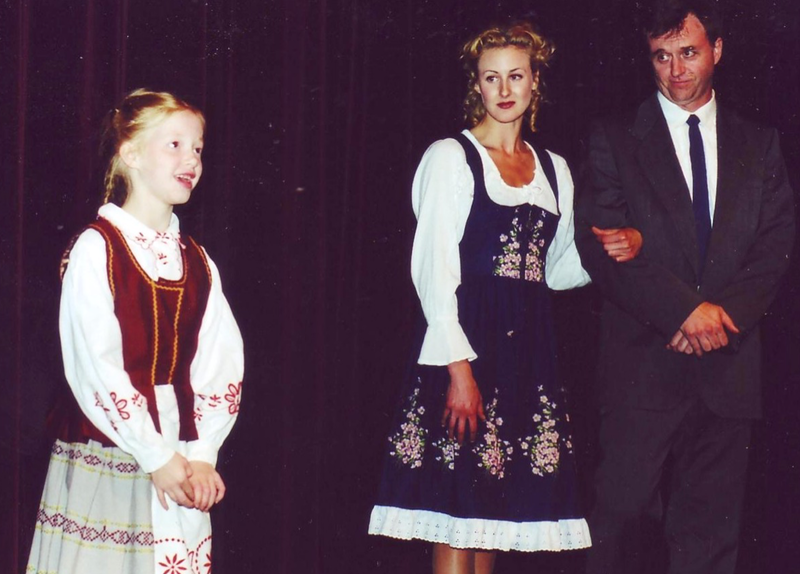 Congratulations to Lori Lloyd, the winner of Contest # 3. She will be receiving two tickets to any of the 2021 season shows. Her entry was drawn from the correct answers received. The name of the show is The Sound of Music, mounted in 2004. In the photo are Clarissa Greaves who played Gretl, the youngest of the von Trapp family, Kate Campbell who played Maria and Christopher Greaves, who played Captain von Trapp….he is also the father of Clarissa. And of course, the musical took place in Austria. 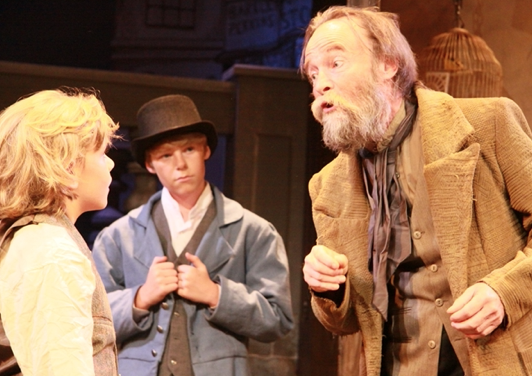 Congratulations to Lisa Schell, the winner of Contest # 2! She correctly identified the show Oliver! in the photo, our 2016 musical production. Featured in the picture were Carson Winmill as Oliver, Jordy Schell as the Artful Dodger and Tim Nicholson playing Fagan. Lisa also nailed the bonus question, the play is based on a story written by Charles Dickens. Lisa has won four tickets for the 2021 season.

Unfortunately, there were no correct answers for Contest # 1. The photo showed Kathryn Boyd, Rod Carley and Betty Mills in the 2007 production of On Golden Pond. Kathryn’s character has come to the family cottage with her new boyfriend and runs into her old Beau, played by Rod. The mother of the family, played by Betty, is watching the dynamics as the two get reacquainted. Without a winner for Contest # 1, we up the ante on the next contest, where the prize will be four tickets to any of the 2021 season.